While other sports have made the mistake of turning political, NASCAR is trying to steer into political challenges and avoid hitting a wall.

This week, NASCAR begins its racing schedule in a rather curious fashion. Normally, the first event of the year is The Clash, a series of small races where the top finishers are gathered for one final sprint. This year, instead of racing at the iconic Daytona Speedway, the series will open inside the famed Los Angeles Coliseum. They have actually paved the interior of the century-old stadium, racing on a cramped, quarter-mile course that is half the size of NASCAR’s smallest short tracks.

The bumps and interference sure to be seen throughout today’s races are a good metaphor to what the sport’s organization is facing in the realm of activist political issues. There is a difference, however, between the political actions with NASCAR, and those seen in recent years in other sports, as the energy behind the issues seems to be flowing in the opposite direction.

Unlike, say, in the NFL with national anthem protests, or the NBA going all-in with Black Lives Matter activism, NASCAR has repeatedly been in the position of having to act against the intents of its fan base, rather than attempting to foist a message onto those watching the sport. The governors have repeatedly taken action seemingly in an effort to appease those outside the sport — and in opposition to those who support racing. 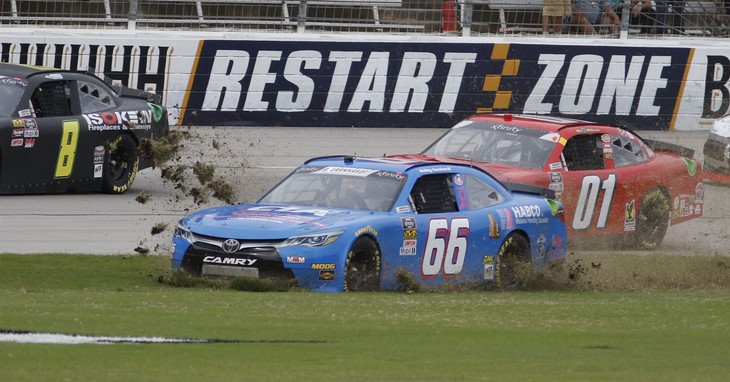 It began years ago, when the sport’s offices put out a message imploring fans to refrain from flying the Confederate flag at NASCAR events. Reacting to some outside pressure, the officials’ statement requested that those attending races not display the banner.

We are asking our fans and partners to join us in a renewed effort to create an all-inclusive, even more welcoming atmosphere for all who attend our events. This will include the request to refrain from displaying the Confederate Flag at our facilities and NASCAR events.

By 2020, with the rise in social upheaval and the BLM protests across the country, the sport’s governing body codified the ban, and the appearance of the flags has been severely diminished. While many opposed this move — just as many were upset at the sport seeming to cave to the social pressures of activists —  most of whom were not fans of the sport, it has proven to be a slippery embankment.

Later in 2020 was the now-infamous garage noose incident involving bi-racial driver Bubba Wallace. This was the national outrage story claiming someone had fashioned the noose in Wallace’s garage, and the reaction within the sport as well as outside was that NASCAR – which some tabbed to be called “Noose-car” – needed to be forced into the new era of social thinking. Until it was shown to be a completely overblown reaction of outrage.

As we now know, it took the FBI being called in to reveal that this rope had been a garage pull that someone had fashioned the year prior, as evidence was found of it existing in the stall the previous racing season. It was not a hate crime, and Wallace was not targeted in any fashion.

Still, that did not prevent him from sitting for an ESPN documentary ,where he spoke of still not forgetting those in the NASCAR community who did not join in on the public display of racial concern over what was a mistaken issue, and his family members continuing to insist it had been a hate-crime against Bubba.

During much of this time, driver Kyle Larson found himself immersed in controversy — for actions that didn’t happen during a race. With the Cup Season suspended for the pandemic shutdown, many drivers participated in virtual contests on Twitch in the iRacing League. During a ‘non-race,’ Larson lost some of his connection and he muttered the N-word epithet towards a white member of his crew. Larson was suspended by his team, then by NASCAR, and ultimately released from Chip Ganassi Racing.

Lost in the furor during his mandated sensitivity training was that Larson is himself bi-racial, and came to NASCAR through the Drive For Diversity program, one that paves the way for minority drivers to have a chance at entering the sport. Bubba Wallace came through this program with Larson. Larson also did not use the term as a derogatory racist insult, but in today’s society, there is no room for nuance.

The latest headache for NASCAR involves a piece of major cultural significance that the sport unwittingly provoked. Following an Xfinity series victory, driver Brandon Brown was interviewed trackside, when the crowd began chanting a familiar, anti-Biden vulgarity. The reporter, trying to save face, spawned the “Let’s Go Brandon” movement.

For his part, Brown attempted to distance himself from any controversy, going so far as writing an editorial in an attempt to step away from the now ubiquitous chant.

As sponsors shied away from his unintentional involvement, Brown eventually had to relent, and he took on a new sponsor in the offseason – the LGB.coin.io cryptocurrency. His team unveiled a new paint scheme displaying the sponsorship, but then soon after, controversy welled up again. Many in the media took exception to the partnership, with examples like USA Today declaring it a “vulgar anti-Biden meme.”

This is when NASCAR looked both weak and inept. As the team splashed the new car look on social media, the governing body rose up to say the team needed to pump the brakes, as approval of such was still in limbo. Soon, the officials came back to say that the team would not be permitted to display the logo of the cryptocurrency. This announcement defies both the claims of the team, who said they had in fact received prior approval from the racing circuit, and the initial, official word.

A PR strategist who represents the racecar driver and Brandonbilt Motorsports, said NASCAR provided written approval of the car’s paint scheme and sponsorship for the upcoming season of the Xfinity Series, NASCAR’s second tier. James Koutoulas, a leading holder of LGBcoin, said NASCAR approved the sponsorship deal contingent on the use of the LGB acronym, rather than spelling out “Let’s Go Brandon,’’ for the paint scheme on Brown’s car.

The team also released a statement from NASCAR that seemed to grant approval, only mentioning some minor tweaks on the paint scheme which were needed to display the number in a clear fashion.

It was fully approved in Dec.

Pressure was applied—some speculating directly from the White House—and they reversed course. pic.twitter.com/JlFRM2ZU6C

Despite the restriction, Brown has signed a lucrative deal with the cryptocurrency to be a main, sponsoring partner. It adds to the growing list of decisions that NASCAR has made which seem influenced by outside influences and work against the will and intent of the fans. In a time of attempted recovery from pandemic lows it seems against their best interests to continue to work in unpopular and contradictory ways.